The military and veterans appreciate the Governor for supporting these bills and signing them into law. These bills are life-changing as men and women depart the armed forces to enter the next phase of their lives, and I know this first-hand.

I enlisted in the Air Force when I was 17 years old and used the GI Bill to help offset the costs of attending college. I gave my country six years, and America rewarded me with an education. Because Pennsylvania was a pro-military state, they helped me earn my college degree at Penn State University, finishing without going into debt. That was forty years ago, and Florida is doing even more!

6) Senate Bill 438—updates Florida’s definition of Uniformed Service to include the United States Space Force and updates military base names.

The Governor’s news release stated, “Florida is the most military-friendly state in the nation, and I am proud to continue that commitment to our military members and their families by signing these pieces of legislation. Providing military families with the resources they need to receive a high-quality education and find good jobs is the best way that we as a state can show our appreciation for the sacrifices that they make.”

MajGen James Hartsell commenced by saying, “It is truly an honor to be here with the Commander-in-Chief of the state of Florida this morning. As a 37-year Marine, I know about leadership, and I am truly honored to serve this leader.” He pointed out that Governor DeSantis is the only currently serving veteran Governor to have deployed overseas in combat. “Our Governor’s leadership has made us the most veteran-friendly state in the nation. …Today’s bills that he will be signing will be reinforcing our state's success.” He continued by pointing out that our Governor has made Florida the most sought-after state by veterans.

The Governor seems to have his pulse on the desires and wishes of his constituents. This truth showed as the crowd was enthusiastic and supportive of the legislation coming out of Tallahassee. I was blessed to witness the crowd show support for a strong leader loved for doing the right thing. 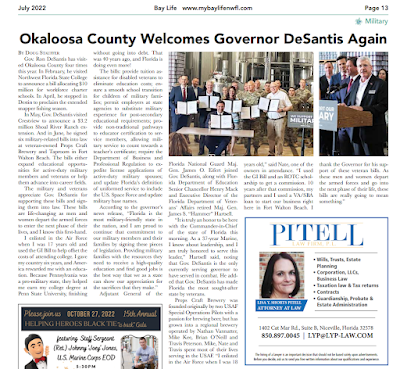 Posted by dougstauffer.com at 4:55 PM No comments: