An Open Letter to the Knoxville City Council 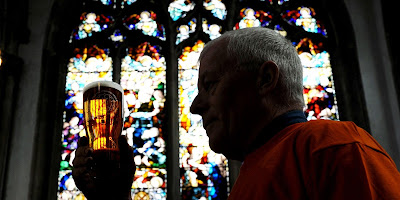 The picture above was included in a blog by a Knoxville area megachurch pastor in support of the change to the city of Knoxville beer ordinance. He said some of the churches he represented might have a gathering that would include tapping a keg of beer.  Unbelievable!

Those City Council names in Red need calls from every constituent; the two highlighted are the most vocally NEGATIVE and probably will NOT switch their votes. The other four names underlined in red are our best chances to defeat this measure. (Note: Praise the Lord for Brown, Pavlis, Della Volpe who have consistently voted on the side of churches against removing the protective barrier.)

Most conservative Knoxville churches are completely unaware that the Knoxville City Council is voting next Tuesday (November 22, 2016) to remove the 55-year old, 300-foot protective barrier around churches. This beer ordinance banned establishments from getting beer permits for on-site consumption.

The two most vocal city council members (Brenda Palmer and Finbarr Saunders) said at the meeting that this provision must not be that important to churches since they have only heard from a few people. In response to their incorrect conclusions, churches need to mobilize to show that we will stand against government easing of the protections against the proliferation of alcohol.

We need everyone's prayers, vocal support and even attendance at the November 22, 2016 Knoxville City Council meeting.
Because we do not have much time, we need an email address to send the talking points. To whom can we email the information within the church?

Past Proof of Effectiveness

This ordinance has been enforced to protect churches in the past, including our church (Antioch Baptist Church at 5709 North Broadway). The incident in question involved a bookstore in 2005. The Lost Savant opened up at 5703B North Broadway selling beer within our church’s buffer zone. [1]

Because of this ordinance alone, this business had to stop selling beer so close to our church and chose to relocate rather than attempting to obtain the more expensive state liquor license. For that reason alone, the City Council members claiming that the current ordinance is useless and powerless are dead wrong. Granted the Knoxville City Council through its ordinance cannot stop a business from obtaining a liquor license but they can stop the much more easily accessible and cheaper beer license by leaving the amendment in force to protect churches. This ordinance serves as the first line of defense for churches.


Some of the most vocal City Council members have raised the spurious argument that the beer ordinance does not GUARANTEE that a business selling alcohol cannot move in next to the church. This is absolutely true but deceptive! They argue that there is no true protection because of this so-called loophole of getting the much more difficult and expensive liquor license:

The beer ordinance acts as an imperfect defense and the first line of defense. It may not stop every single alcohol-selling establishment from locating next to a church, but it surely acts as a deterrent. It performs as it was designed to function. Those not wanting to go through the difficult and expensive process of getting a liquor license might find it easier, cheaper and less of a headache to simply locate outside the church's buffer zone.

It is important to note that churches frequently house Boy Scout and Girl Scout troops, day cares, homeschoolers, sports programs, youth ministries, along with Alcohol Anonymous Programs that meet on most any day of the week and not just Sundays and Wednesdays. This small protective barrier guards churches by making things a bit more difficult to obtain any type of alcoholic beverage permit for on-site consumption.

Aaron McClaine who was too close to a church to get a beer permit admitted that this ordinance created “months of delay, mountains of paperwork and thousands of extra dollars” so no one can claim that it has been ineffective in slowing and sometimes eliminating the encroachment upon churches. The beer license costs about $300 with a $100 annual privilege tax. The alcohol license can cost up to $5,000 and involves a much more stringent process.

McClaine said in his brewery there is a different culture that is “peaceful with no rabblerousing,” but the fact that this point must be made reveals that he knows that this is frequently not the case with establishments that serve intoxicating beverages to their patrons. For him going to the state for a more expensive license has been the cost of trying to locate near a school, daycare, church, hospital or funeral home for 55 years.

Rodney Arnold (One Life Church) who supported changing the amendment said if this ordinance protected churches in some way, he might have a different outlook. Yet, it is a fact that the current beer ordinance and restrictions does and has protected neighborhood churches in the inner city for 55 years. Our church is but one example!

Three Things We are NOT:

Habakkuk 2:15 Woe unto him that giveth his neighbour drink, that puttest thy bottle to him, and makest him drunken also…

Two Things We Are Asking:

1.   We are asking the City Council to vote "no" against this change in ordinance (Chap 4, article 2, Division 2, Section 4-66(a) that served as a sanctuary for long established churches from alcohol encroachment in Knoxville since 1962 (not since prohibition). It may not eliminate all encroachment upon churches but it performs its intended purpose of being the first line of defense.
2.   We are asking you to allow us to send our children on our church playground with the assurance that you are not making it easier or more likely that an inebriated person will be walking across the property or worse yet driving across it.

Why was this ordinance passed and why has it stood the test of time for almost 55 years? I believe there are three primary reasons:


All we are asking for is a little respect, some common sense and offering safety to our children as a first priority. I know this election cycle has been one that has displayed little respect (with no civility) for others. Ask yourself these two questions:

Protect the Endangered Species and Our Precious Ones too (our children)

Consider this: If a storefront church’s rent increases, they can simply relocate. The same is true if they don’t like their neighbors; they could simply relocate. Since the early 1970s, my church has resided just off North Broadway in a commercial area surrounded by businesses. We just finished a $600,000 renovation project which included adding an elevator to provide for our elderly and an outside playground and a basketball area for our youth. Unlike a storefront church we can’t just pull up stakes and move and we are not going anywhere. We are asking the City Council to protect our existing environment by voting down this change.

We protect our wildlife, endangered species, environment, what about our most vulnerable—the children? Don’t they deserve more protection than animals and inanimate objects? Don’t our families need a little reprieve from the onslaught taking place by a society that increasingly abuses alcohol? Those impacted are more than simply the abuser. The enablers are also responsible for the mayhem and this is not limited only to those putting the drink to their lips. We need laws to insulate our children from harm; not ones that are changed for the sake of the convenience of a few.

If one child is harmed as a result of this change was the change worth it simply for convenience sake? Society has changed but this does not mean that we need to give up on the next generation by making alcoholic beverages more pervasive.

Knoxville is by no means unique in this issue. Almost all of the cities in Tennessee have similar provisions concerning limiting beer sales in close proximity to churches.

Some of the surrounding cities with distance requirements include:


Posted by dougstauffer.com at 6:27 AM