Bible students devoted to the truth believe God to be the Author of the entirety of scripture—all sixty-six books. Yet, God did not select a postal carrier to send His word from Heaven to earth. He instead revealed His word to various spokesmen to facilitate the delivery of scripture. Simply put, God spoke to men; these men spoke the words, but it was ultimately God speaking to the end recipients.

Hebrews 1:1 God, who at sundry times and in divers manners spake in time past unto the fathers by the prophets,

The Bible reiterates this truth when it declares that “holy men of God spake as they were moved by the Holy Ghost” (2 Peter 1:21).[1] Yet, while God’s word emphatically points heavenward toward the true Author of divine scripture, the world unfortunately declares the Bible man-made. As Haggai testified, every spokesman was simply “the LORD’S messenger in the LORD’S message.”

Consider these few phrases as examples of this truth: “the law of Moses” in the Old Testament (Joshua 8:31) or “my gospel” (Romans 2:16) in Paul’s epistles. Further confirming this line of reasoning was Paul’s ownership of that which God had committed to him.

1 Corinthians 9:17 For if I do this thing willingly, I have a reward: but if against my will, a dispensation of the gospel is committed unto me.

Not only was the message inseparably associated to its spokesman, but the message was also custom-made for the particular audience God deemed to be its primary intended recipients. Each of God’s spokesmen had a message for a specific audience living in a particular time. Unfortunately, this presents two very real dangers for the misguided Bible student:

In order to further develop this thought, consider the spokesmen as they relate to the various sections found within scripture. They are presented in the following order based upon the basic divisions given in the previous chapter.
It is important to consider two additional thoughts as we explore some of the details linked to the spokesmen associated with each of these scripture segments:

1.  Most sections have multiple spokesmen, and
2.  Those sections containing several contemporaneous spokesmen generally have one spokesman serving as the primary spokesman at any given time.

As previously discussed, the section titled The Pentateuch covers nearly 2,500 years. Obviously, such a lengthy time frame means that this period contained several different spokesmen. Some of the primary spokesmen include Noah, Abraham, Isaac, Jacob, Joseph, Moses, etc. Each of these men received a particular God-given message and, as God’s spokesman, presented his message to his respective audience(s). In a later chapter, we will discuss the further divisions found within this section which, include the Ages of Innocence, Conscience, Government, and Patriarchs. 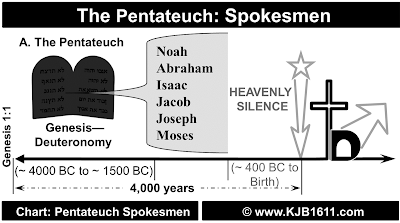 Those living during this time had to listen to God’s chosen spokesmen to ensure knowing God’s will for their lives. Those who refused to heed their spokesman’s message neglected the message to their own peril. The choice was and is very simply: ignore the spokesman (like Korah rejected the words of Moses—Numbers 16:1-3) or follow your spokesman (like Joshua and Caleb hearkened to the words of Moses and faithfully strove to enter the land of promise—Numbers 32:11-12)!

When an individual follows God’s spokesman, he displays genuine faith in God and in God’s word. The specifics of that faith (or content of that faith) have obviously changed throughout history, but God always REQUIRES faith stating a transdispensational truth that it is IMPOSSIBLE to please Him without it.

Hebrews 11:6 But without faith it is impossible to please him: for he that cometh to God must believe that he is, and that he is a rewarder of them that diligently seek him.

Moses’ ministry serves as an excellent demonstration of the validity of these claims. Forty years after fleeing Egypt, Moses returned with a message from God for the children of Israel. God required Moses’ audience to accept His word as delivered by Moses. The Bible offers several examples of God’s word and the people’s obedience. For example, by faith, Israel put the blood on the doorposts and walked safely out of Egypt. Those who refused to trust God (through their spokesman Moses) helplessly watched their firstborn die.

Hebrews 11:28 Through faith he kept the passover, and the sprinkling of blood, lest he that destroyed the firstborn should touch them.

Shortly thereafter, the people’s faith in Moses’ message carried them safely across the Red Sea.

Hebrews 11:29 By faith they passed through the Red sea as by dry land: which the Egyptians assaying to do were drowned.

In the wilderness, God used His spokesman to deliver the Law. Those who despised that Law died “without mercy.”

Hebrews 10:28 He that despised Moses’ law died without mercy under two or three witnesses:

No doubt that at least in content, Moses was the primary spokesman during this period. 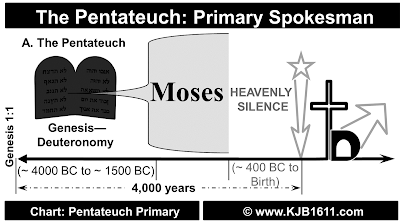 Unquestionably, wholly following the message given by Moses was the will of God for those living during Moses’ ministry. Those who followed the word of Moses demonstrated their faith though their obedience to the word of God. Their faith in Moses’ word would be borne out through their outward obedience.

James 2:26 For as the body without the spirit is dead, so faith without works is dead also.

Every sincere Bible student recognizes many distinctions between the message of God through Moses to the Jews and God’s message given to the New Testament Church. This is easy to prove by simply considering a few matters. Certainly, no New Testament believer would give any credence to someone claiming deliverance through blood placed upon doorposts.

Likewise, no Christian would be willing to walk out into the Red Sea expecting anything less than a good soaking. For this reason, among many others, it is inconceivable how anyone could claim to be a nondispensationalist in doctrine and practice and simultaneously claim to believe the whole Bible. All those who believe the Bible are obedient to God by rightly dividing it.

2 Timothy 2:15 Study to shew thyself approved unto God, a workman that needeth not to be ashamed, rightly dividing the word of truth.

The next section (History) and the one following it (Prophets—Old Testament) overlap each other by approximately 300 years. As for content, the previous section, The Pentateuch, dealt with the giving and receiving of God’s truths and rules for living. However, Joshua (and the books that follow) reflects more of an action book indicative of a historical account. (Interestingly, one can readily see that the transition began with the book of Deuteronomy, which is very much a recounting of Israel’s history in the wilderness.) Like the previous section, which spanned several centuries, this period covers an extended period of approximately 1,000 years. Some of the most prominent spokesmen include men like Joshua, Samuel, Elijah, Elisha, Ezra, Haggai, Zechariah, etc. 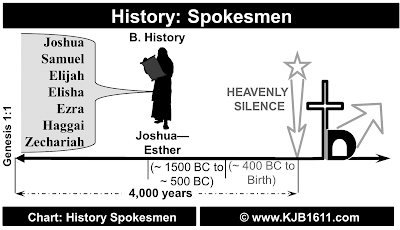 The spokesmen in this section delivered God’s message through the initial triumphs in Canaan, the ensuing years of complacency, the days of apostasy, the toilsome years of captivity, and the glorious days as God’s children returned to their once forsaken land.

Unlike the previous section with Moses (Pentateuch), this portion (History) did not have one predominate spokesman. When Moses died, God called Joshua to pick up his mantle. Joshua had been present at Sinai when Moses received the commandments and supported Moses’ efforts to enter the land of promise despite the opposition from the ten faithless spies (Numbers 13:30-33). He loved and served Moses faithfully; yet, his task was to lead people into Canaan.

Joshua’s message did not contradict the message of Moses but rather built upon it (Joshua 11:15). Any man who truly accepted Moses as God’s spokesman would likewise accept Joshua as God’s ordained replacement. With the mantel shifting, so did the responsibility to follow the new God-called spokesman. No one could safely reject Joshua’s message in deference to remaining strictly a follower of Moses. Those who rejected Joshua, even if to remain a follower of Moses, did so to their own peril.

Joshua 1:16 And they answered Joshua, saying, All that thou commandest us we will do, and whithersoever thou sendest us, we will go. 17 According as we hearkened unto Moses in all things, so will we hearken unto thee: only the LORD thy God be with thee, as he was with Moses. 18 Whosoever he be that doth rebel against thy commandment, and will not hearken unto thy words in all that thou commandest him, he shall be put to death: only be strong and of a good courage.

If Joshua’s message varied from that of Moses, it was not a message contradictory but a different message for a different audience in different circumstances for a different time period. Another unique aspect to this section is the fact that there were times when God left the people without a true spokesman. The Book of Judges records these instances when God did not provide a particular spokesman. The tragic consequences of such circumstances were also repeatedly described: without a spokesman, the people did their own thing.

Judges 21:25 In those days there was no king in Israel: every man did that which was right in his own eyes.

During these periods described in Judges (Judges 17:6; Judges 18:1; Judges 19:1; Judges 21:25), Israel had Moses (in written form) but no visible national leader to follow. Each time the children of Israel turned away from the Lord, God delivered them into the hands of their enemies. Sadly, the children of Israel always seemed to follow the same pattern following their rejection of the Lord. Their rebellion would bring persecution. This persecution would cause them to cry unto the Lord for deliverance. God would then raise up a deliverer known as a judge (Judges 3:9; Judges 3:15).

Clearly, when God did not appoint a spokesman, man remained in a state of utter confusion. Darkness reigned! In such cases, people generally did whatever they deemed to be right in their own eyes. The same unfortunate outcomes show themselves prevalent each time people ignorantly refused to follow their appointed spokesman.

As previously stated, this section is grouped more for the type of its content than for any chronology. Yet, this poetry section of scripture, like the others, had defined spokesmen. These spokesmen included Job, David, and Solomon, along with lesser known figures like Elihu and Asaph. All were greatly used of God. 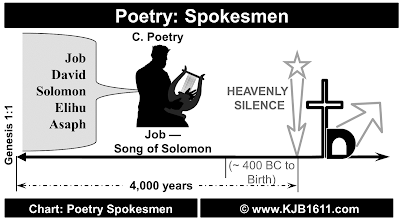 This period of time yielded the final spokesmen of the Old Testament period. More importantly, it was the work of these men to prepare the way for the first and second coming of Christ. The content of their messages was often twofold:
Every book in this section bore the name of its spokesman with the exception of Lamentations, which contained the lamentations of the weeping prophet Jeremiah. Like the previous sections, this portion of scripture provided several different spokesmen. Although they each had their distinct audience and purpose, their ministries often intertwined and certainly built upon each other. Chronologically, this section is best divided as: 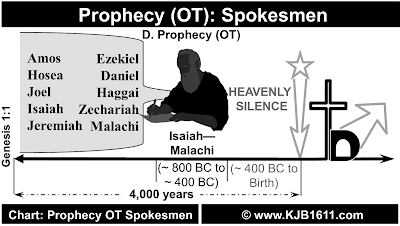 The “400 years of silence” refers to the time between the last of the Old Testament prophets and the arrival of Jesus in the New Testament. The phrase refers to the lack of new biblical revelation to the Jews (also called the intertestimental period). Yet, God remained active in world history causing major political and military events to occur, especially as He had predicted in the book of Daniel. During this time, the nation of Greece came to power and was conquered by Rome, fulfilling prophecy. This period should not be equated with the absence of God from any direct communication with people but as simply a period of no new transmission of the sacred scripture.

[1] For more in-depth information on the distinctions between revelation, inspiration, and men being moved by the Holy Ghost, see “The Fingerprint of God” by Andrew B. Ray.

Posted by dougstauffer.com at 5:38 PM