A Pastor's Ponderings: The Fundamentals of Fathers, Fathering and Fatherhood 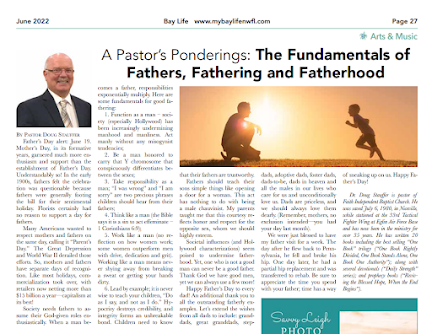 Father’s Day ALERT: June 19th. Mother’s Day, in its formative years, garnered much more enthusiasm and support than the establishment of Father’s Day. Understandably so! In the early 1900s, fathers felt the celebration was questionable because fathers were generally footing the bill for their sentimental holiday. Florists certainly had no reason to support a day for fathers.

Many Americans wanted to respect mothers and fathers on the same day, calling it “Parent’s Day.” The Great Depression and World War II derailed those efforts, so mothers and fathers have separate days of recognition. Like most holidays, commercialization took over, with retailers now netting over $15 billion a year—capitalism at its best!

Society needs fathers to assume their God-given roles enthusiastically. When a man becomes a father, responsibilities exponentially multiply. Here are some fundamentals for good fathering:

1. Function as a man—society (especially Hollywood) has been increasingly undermining manhood and manliness. Act manly without any misogynist tendencies;

2. Be a man honored to carry that Y chromosome that conspicuously differentiates between the sexes;

3. Take responsibility as a man; “I was wrong” and “I am sorry” are two precious phrases children should hear from their fathers;

5. Work like a man (no reflection on how women work; some women outperform men with drive, dedication and grit). Working like a man means never shying away from breaking a sweat or getting your hands dirty.

6. Lead by example; it is never wise to teach your children “do as I say, and not as I do.” Hypocrisy destroys credibility, and integrity forms an unbreakable bond. Children need to know that their fathers are trustworthy.

Fathers should teach their sons simple things like opening a door for a woman. This act has nothing to do with being a male chauvinist. My parents taught me that this courtesy reflects honor and respect for the opposite sex, whom we should highly esteem.

Societal influences (and Hollywood characterizations) seem poised to undermine fatherhood. Yet, one who is not a good man can never be a good father. Thank God we have good men, yet we can always use a few more!

Happy Father’s Day to every dad! An additional thank you to all the outstanding fatherly examples. Let’s extend the wishes from all dads to include: granddads, great granddads, step-dads, adoptive dads, foster dads, dads-to-be, dads in heaven and all the males in our lives who care for us and unconditionally love us. Dads are priceless, and we should always love them dearly. (Remember, mothers, no exclusion intended—you had your day last month).

We were just blessed to have my father visit for a week. The day after he flew back to Pennsylvania, he fell and broke his hip. One day later, he had a partial hip replacement and was transferred to rehab. Be sure to appreciate the time you spend with your father; time has a way of sneaking up on us. Happy Father’s Day!

Read the newspaper (page 27)
Posted by dougstauffer.com at 11:30 AM