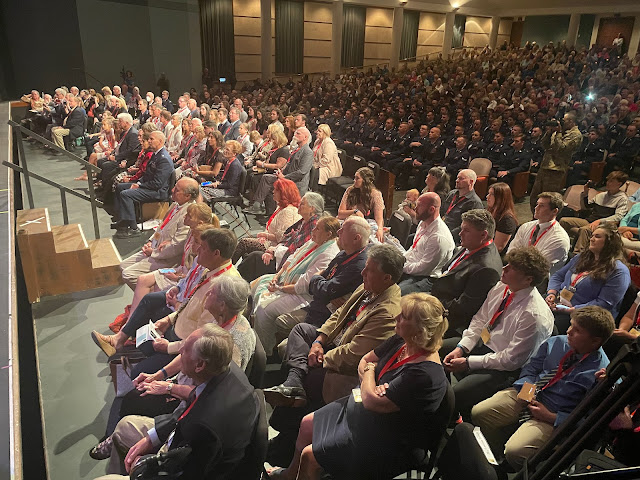 On April 18, 2022, Okaloosa County was privileged to host history in the making. Almost 2,000 of us were blessed to say, "I was there to witness this historic event." This date marked the 80th Anniversary of the World War II Doolittle Raiders bombing of Tokyo. Eighty men launched the first retaliatory strike against Japan's unprovoked attack upon America eighty years ago.

The raid was the first on Japanese soil, four months after their attack on December 7, 1941, when three hundred Japanese aircraft destroyed the Navy's Pacific Fleet in Pearl Harbor. The Doolittle Raid on the Japanese capital boosted American morale and exposed Japan's vulnerability from the air. Although the damage to Tokyo was minimal, many historians credit the raid as the critical factor in the Japanese defeat at the Battle of Midway—often cited as the turning point in the Pacific.

Ted Corcoran's heart seems to skip a beat at the mention of the Doolittle Raiders. Talking with him is like conversing with a Doolittle historian and cheerleader. One of Ted's many insights: "My awakening to the significance of the Raiders started in 2006. Since then, I have come to love the Raiders as a group and individually on a personal level. I am proud that the Chamber was able to bring the Raiders to this area in 2008, 2013, and finally in 2022. It is important to me to educate the community concerning their history by bringing the knowledge of the Raiders to the forefront. I am thrilled to have played my part in getting them to be relevant again in this area after being overlooked for far too long."

Okaloosa County and the Raiders. The Doolittle Raiders trained at Eglin field in 1942. Although the Army/Air Force had just formed in 1941, AFSOC considers the Doolittle raid the first special operations mission. The Raiders held their 15th reunion here in 1957, and they returned in 1968 for their 26th reunion. They then vanished off our radars until Ed Horton (crew 10) moved to Ft. Walton Beach. In the late 1990s, the local newspaper mentioned that Ed's wife had passed away, thus preventing him from attending future reunions.

Wes Fields, a gunner at Hurlbert Field and an auxiliary sheriff's deputy, read the newspaper article. He volunteered to transport Ed to future reunions. The Raiders honored Wes by making him director of Raider security. In 2006, Wes introduced Ed Horton to Ted Corcoran, who soon realized the significance of that encounter. Ted watched his relationship with the Raiders bud and blossom after attending the 2007 and 2008 Raider reunions.

In 2008, only eight of the 80 raiders remained, so the Chamber created a special event called "The Homecoming" on May 29-31, 2008. The Homecoming became the reintroduction and re-engagement of the Raiders with the Okaloosa County community. In 2013, Ft. Walton Beach would host the final reunion, and the five remaining Raiders attended.

The Goblets. For the annual reunion on April 18, 1959, the city of Tucson created 80 silver Goblets. The goblets bore the Raider names printed upright and upside down. At each reunion, the living Raiders toasted their fallen brethren. After a Raider passed, his goblet was inverted. A final toast with the last three Raiders took place in November 2013.

Two years later, Congress bestowed the Congressional Gold Medal upon the Doolittle Tokyo Raiders "for outstanding heroism, valor, skill, and service to the United States in conducting their bombings of Tokyo." The last living Raider, Colonel (ret.) Dick Cole died on April 9, 2019, at 103 years old! He was co-pilot of the lead plane with Colonel Doolittle. Covid delayed the Final Goblet Ceremony for several years, with the Ft. Walton Beach Chamber chosen to host the Final Goblet Ceremony.

The Ceremony. The featured attendees at the Final Goblet Ceremony included the family of Col. Dick Cole along with the other Doolittle Raider families. The historic ceremony was honored by the presence of the Air Force's top brass: Secretary of the Air Force, Frank Kendall III; Chief of Staff of the Air Force, Gen. CQ Brown, Jr.; Lt. Gen. Jim Slife, commander of Air Force Special Operations Command; and Lt. Gen. Brad Webb, commander of AETC. Secretary Kendall said of the Doolittle Raiders, "Like many of the greatest generation, they saw it as their duty and accepted it without any regret."

In recognition of the Air Force's 75th Anniversary, sixteen local active-duty and distinguished veterans were honored to represent the legacy of each Doolittle crew and the contributions of fellow Airmen to the rich history of the United States Air Force.

Lt. Col. (ret.) Rich Cole, son of Col. Richard E. "Dick" Cole, performed the ritual of turning over his father's goblet—the final goblet to be inverted. He shared the family's statement, "The Cole family is deeply honored and appreciative of the Okaloosa County Community hosting the Goblet Ceremony for our Dad .... We are thankful to celebrate this moment in the city where it all began." The National Museum of the United States Air Force at Wright Patterson AFB in Ohio permanently displays the Goblets. 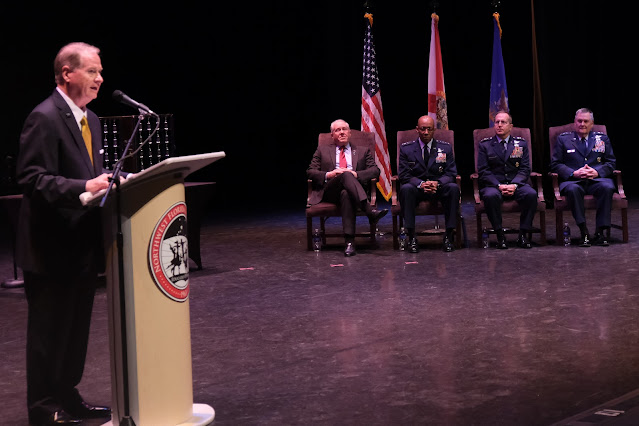 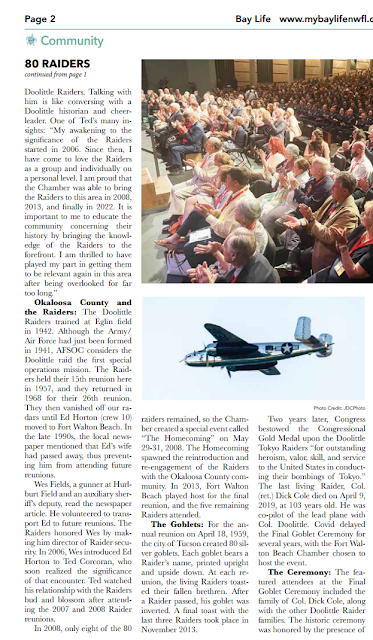 Posted by dougstauffer.com at 9:01 PM