A Pastor's Ponderings: When God Changes Your Course 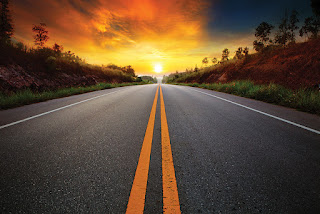 Have you ever had something happen where you know that a different outcome could have completely altered your life forever…or maybe even ended it? This scenario has happened to me on several occasions, with the most recent involving two tractor-trailer trucks, but first a little background.

My wife and I spent nineteen years traveling the United States and around the globe (pre-Covid, of course). Our adventures (and mishaps) could fill a book. What would you think if I told you that my wife and I have been in cars that have caught fire on three occasions? Additionally, a commuter train hit my truck while I was sitting at a red light in Baltimore. Oh yes, and while riding as a passenger in a packed tour bus, it flipped over. Three good-sized men landed on me, pinning me against the window. All without bodily injury to me! No, I am not a cat with nine lives. Some might think of me as just lucky. Perspective is everything, but let me first tell you about the highway pileup that wasn’t.

Late in the evening on June 28, 2021, my wife and I were leaving Knoxville, Tennessee, pulling a trailer with over two tons of my books. Suddenly, two tractor-trailer trucks jackknifed right in front of us. I slammed on the brakes with no hopes of avoiding an accident. I quickly veered to the left with no escape in sight. Both trucks were sliding in that direction, forcing me into the median and ever closer to the concrete highway divider.

Just as quickly as it all started, both trucks stopped abruptly, leaving me just enough space on the shoulder to squeeze between the trucks and the wall. Relieved, right? But as I was passing by the trucks, a man who has crossed in front of them now appeared directly in my path. I laid on the horn, making him skip a step leaving me just enough room to miss him. I don’t know what went through his mind, but I can testify concerning our astonishment, relief and jubilation.

Needless to say, we spent the next few hours on the road driving in bewilderment. Every pastor has to have a moral to the story, right?

Well, after we had packed the trailer, I asked the Pastor who helped us pack to pray for us and then jokingly stopped him before he started, asking if he wanted to take responsibility since our load was so heavy. He unhesitatingly delved right into fervent, heartfelt prayer. The Bible says, “the effectual fervent prayer of a righteous man availeth much” and to “pray without ceasing.”

Do most people fully understand prayer or unwittingly doubt that an omnipotent God might really intercede on our behalf? Does our lack of faith cause us to fear attributing any given outcome to supernatural intervention? It takes faith to believe, and “without faith it is impossible to please God.” I believe God performed a miracle that night, likely two of them. 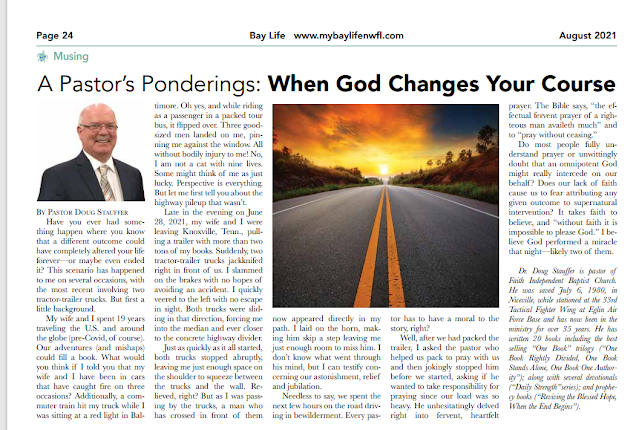 Posted by dougstauffer.com at 6:20 AM