A Pastor's Ponderings: The Military and the Ministry

America has proven to be the most blessed nation on earth for about the last two and a half centuries. As is generally the case, the few selflessly sacrifice for the many. Some sacrifice by enlisting with the military for love of country (or serving on the front lines in other capacities), while others sacrifice by serving in the ministry. I have been doubly blessed to serve in both.

My wife and I have extensive patriotic heritages spanning over 100 years: from WWI and WWII to Vietnam; the Cold War to Iraq. There are many high points with some low points too. At 21 years of age, Judy’s uncle was killed in WWII, but her father served on the U.S.S.  Missouri where General Douglas MacArthur accepted the Japanese surrendered in Tokyo Bay.

My father served as a platoon leader in Vietnam during the Tet Offensive as the enemy attempted to overrun bases throughout the country. His Bronze Star attests to his gallantry. One of my most memorable high points: taking control of an F-15 Tactical Fighter. However, pulling 7G’s doing a loop maneuver pushed my body beyond its G-tolerance limits. Like so many others, our families’ dedication to country stems from a willingness to defend these United States against all enemies—foreign and domestic.

Very few people realize the extent to which the Bible references warfare. For instance, following the Jews’ deliverance from Egypt, Moses said, “The LORD is a man of war...” Likewise, the New Testament includes many references to warfare.

For instance, the Bible tells us to be a “good soldier of Jesus Christ” by fighting “the good fight” while wearing the “the whole armour of God.”  It further admonishes us that “no man that warreth entangleth himself with the affairs of this life; that he may please him who hath chosen him to be a soldier.” I hope and pray never to go AWOL (Absent WithOut Leave).

The Bible continues by stating that dedicated Christians “do not war after the flesh” and that “the weapons of our warfare are not carnal, but mighty through God to the pulling down of strong holds.” It mentions only one offensive weapon—the “two edged sword,” also referred to as the “sword of the Spirit” and the “word of God.”

Even the church hymnbooks reflect these Bible truths with songs like “Hold the Fort” and “Sound the Battle Cry.” Other familiar hymns are “Onward Christian Soldiers” and “Am I a Soldier of the Cross.” The hymns expressed the truths found within the pages of God’s word.

My advice for every Christian never has and never will waver:

When you find yourself feeling defeated or just down and discouraged, keep in mind this insight: “For we wrestle not against flesh and blood, but against principalities, against powers, against the rulers of the darkness of this world, against spiritual wickedness in high places” (Ephesians 6:12). So, when you find yourself in a skirmish or an all-out war, be sure to look up—our battle is spiritual, and the final chapter has already been written. Spoiler alert: we won! 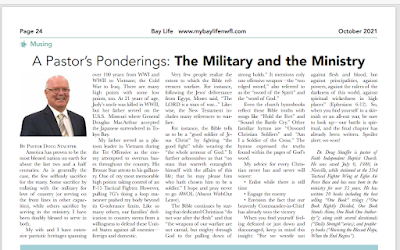 Posted by dougstauffer.com at 6:19 AM

Easily adapt graphics to your cellular display screen regardless of model or model. We tried to play on the iPhone 7s, Samsung Galaxy S10, and Huawei P30 without any problem. The navigation menu on the backside of the display screen is great for simple access to games, chat features and stay assist. There is also be|can be} an enormous choice of money transfer choices and on-line voucher fee strategies as well, and withdrawals are processed 우리카지노 swiftly and with a minimum of fuss.