A Pastor's Ponderings: Passed From Death Unto Life

I joined the Air Force midway through my senior year and arrived at Eglin Air Force Base one year later. After two years on the base, I moved to Okaloosa Island, where I lived “the life” in one of two top-floor apartments of a four-plex at the island’s entrance. It was Party Central until one fateful night as I stared down the barrel of a handgun.

Backstory: my stockbroker neighbor loaned his car to his new occupant, who subsequently wrecked it. I accompanied the guilty party to a local bar to express his apologies, where he was told not to return without the money to repair the vehicle. We rushed back to gather some of this man’s belongings. Suddenly, the front door opened. We hurdled the back balcony, landing in the sand below.

Later, I watched in amazement as the drunken madman cast much of the young man’s belongings over the front railing, finishing with his television crashing to the pavement. After things quieted down, I decided to return to my apartment. As I was ascending the steps, my neighbor’s door burst open with him running toward me, pointing his gun in my direction. He reached me at the top of the stairs with the gun now pointed in my face.

After living too often on the edge of the precipice, that incident caused me to make three life-changing decisions: I was no longer going to live to party; I was going back to college night classes; I was going to go to church to find a wife. Please do not judge my motives too harshly; I found a wife at church and much more!

These new resolutions brought many unexpected outcomes. I went to church looking for what I thought I wanted or needed, and God saw fit to bless me far beyond my wildest expectations. Going to church not only netted me the woman of my dreams but the Saviour I did not know! The Bible sums up what happened this way:

“Now unto him that is able to do exceeding abundantly above all that we ask or think, according to the power that worketh in us,” (Ephesians 3:20).

Yet, we are cynical people, so what’s the catch, right? There is one qualifier, and it has everything to do with submission to His will. Since God is able to do what we ask, what hinders His follow through? God purposefully limits what He can do “according to the power that worketh in us.” God’s Spirit living within each believer is the catalyst that allows His power from within to direct us. The power will not work unless the believer submits his will to the will of the heavenly Father.

The title of this article comes from two Bible verses that mention passing from “death unto life” (John 5:24 and 1 John 3:14). Check them out! 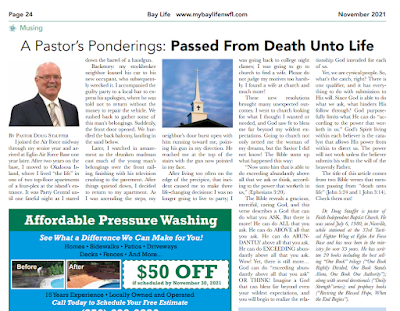 Posted by dougstauffer.com at 10:28 AM