The Emerald Coast Classic and the Doolittle Raiders 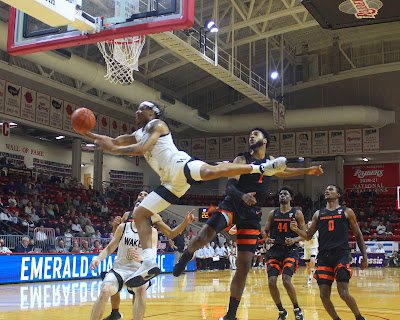 Knowing history is essential for several reasons, not the least because history serves as one of our best teachers. In The Life of Reason, the American philosopher George Santayana wrote, “Those who cannot remember the past are condemned to repeat it.” The history I will share is not near so ominous as it refers to a basketball tournament at a historic location.
Okaloosa-Walton Junior College opened in 1963 with the nickname “Raiders” in honor of Jimmy Doolittle and his crew. These brave pilots were responsible for the Tokyo Air Raid in retaliation for the Japanese bombing of Pearl Harbor, with mission training beginning at a tiny airfield at Eglin Air Force Base. On April 18, 1942, sixteen B-25s, dubbed the “Doolittle’s Raiders,” took off from the deck of the U.S.S. Hornet enroute to bomb Japan. You might be wondering what this has to do with a basketball tournament.
Everyone needs to experience the hidden gems located in North Niceville. I am referring to the college, the state-of-the-art Mattie Kelly Arts Center, and the top-notch basketball arena at Northwest Florida State College. This sleek, modern complex rivals some Division 1 programs in its atmosphere, with a seating capacity of just under 2,500. This facility has fielded some great teams, but there is more. The basketball facility houses an impressive World War II display located on the east side dedicated to former Air Force General Jimmy Doolittle.
In 2008, the school’s name changed to Northwest Florida State College. Since 2014, the college has hosted the Emerald Coast Classic, a premier college basketball tournament televised nationally on the CBS Sports Network. It has become one of the country’s more popular college basketball tournaments. I urge all sports fans in the panhandle region to experience the Emerald Coast Classic during Thanksgiving week. This year’s Emerald Coast Classic started on Friday evening with two exciting overtime games in the semi-finals.
LSU beat Penn State 68-63 in overtime to advance to the championship game. The environment was boisterous and exciting. I mean loud, loud, loud. The second game also went into overtime, with Wake Forest defeating Oregon State 80-77.
On Saturday, Penn State handily defeated Oregon State 60-45, while LSU beat Wake Forest in the title game 75-61. It is hard to believe the caliber of basketball taking place in this arena during the Emerald Coast Classic, but this venue is a gem for more reasons than just this tournament. Mark your calendar for next Thanksgiving; you will be pleasantly surprised! I know I was.
Read the article
Read the newspaper 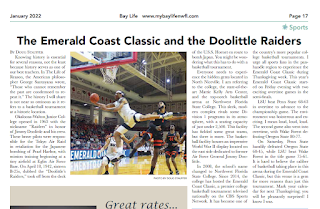 Posted by dougstauffer.com at 6:47 AM

Heidari et al. constructed an RSM to teapots with infuser optimize the shrinkage and warpage of three polylactic acid based bone screws. Using this method, they successfully obtained the minimal shrinkage and warpage of the product. A survey of surrogate models for injection molding optimization. Zhou et al. adopted the concept of case-based reasoning to find out} the preliminary process parameters and mentioned four case-adaptation methods.