A Pastor's Ponderings: I Stand for Christ on My Knees 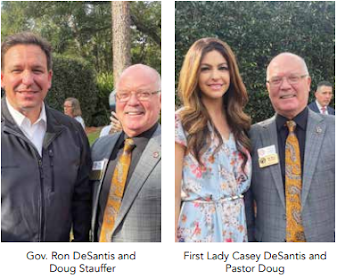 Have you ever wondered how to make a difference in such a big world? The Bible says, “And of some have compassion, making a difference” (Jude 22). Compassionate people are the difference makers. Additionally, God gives us the recipe for living peaceably by telling us to pray for all those in authority.

“I exhort therefore, that, first of all, supplications, prayers, intercessions, and giving of thanks, be made for all men; For kings, and for all that are in authority; that we may lead a quiet and peaceable life in all godliness and honesty” (1 Timothy 2:1-2).

This country seems to be changing at lightning speed, so it behoves us to consider our humble beginnings. In just a few centuries, the United States evolved from a band of rebellious colonies with an untamed frontier into the world’s leading economic and military superpower. Many Americans believe that our unprecedented wealth and world dominance resulted from our ingenuity and drive.

Historically, American universities taught that our national prosperity was born from our system of government (a republic form of government instead of the communist or socialist systems). What did the United States possess to facilitate such a rapid transformation? The answer appeared during our nation’s infancy, and the 19th century Frenchman Alexis de Tocqueville validated it.

In 1831, the French government commissioned historian Alexis de Tocqueville (1805-1859) to travel throughout America. His official assignment was to evaluate the prison system, but Tocqueville’s travels throughout the states gave him a desire to understand America's greatness. He was a critic of the political instability of Europe and wanted to document what he saw in America. His discoveries, as he reported to the French Senate, drew these conclusions:

“I went at your bidding, and passed along their thoroughfares of trade. I ascended their mountains and went down their valleys. I visited their manufactories, their commercial markets, and emporiums of trade. I entered their judicial courts and legislative halls. But I sought everywhere in vain for the secret of their success, until I entered the church. It was there, as I listened to the soul-equalizing and soul-elevating principles of the Gospel of Christ, as they fell from Sabbath to Sabbath upon the masses of the people, that I learned why America was great and free, and why France was a slave.”

Toucqueville wrote that the churches made the difference. Even our three-branch Republic form of government originated from God’s holy word and not man’s intellect. “For the LORD is our judge, the LORD is our lawgiver, the LORD is our king; he will save us” (Isaiah 33:22).

Notice the three branch blueprint used by our founding fathers as delineated in Isaiah. God’s system of government included the judicial (judge), legislative (lawgiver) and executive (king) branches of government. Though this is the best form and the biblical form of government, it is not the sole reason for America’s greatness. When the United States of America honored God and His word above all else, we experienced much less turmoil. Supreme Court rulings in the early 1960s squashed the prayers of millions of school children that once traveled up to the throne of grace every school day. So, could you do one thing?

I was recently invited to the Governor’s mansion and had the distinct pleasure to meet with the Governor and his wife. In the most non-partisan way I can, I ask you to pray for Florida’s First Lady, Casey DeSantis, as she undergoes cancer treatments. I told her we would be praying for her; won’t you join me? 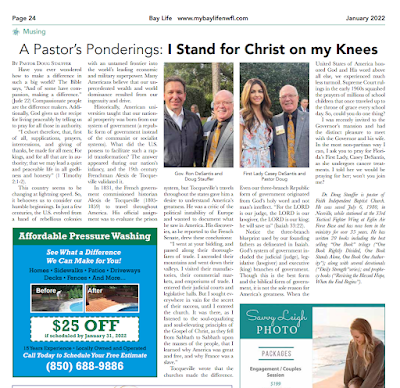 Posted by dougstauffer.com at 6:25 AM