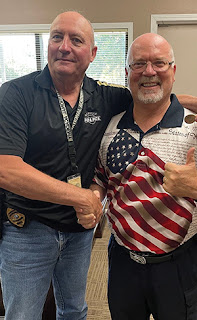 Hello Niceville! After almost four decades, Providence has brought me full circle. I have traveled around the world several times but now have returned to the city that impacted my life more than any other place. Yet, that story is for another time! In 1981, I left Niceville and spent nearly forty years traveling to some of the most remote and memorable places on earth. These travels span from the Amazon jungles to the islands in the Caribbean, from China to Europe, etc.I witnessed an incredible contrast: from the most lavish scenery to indescribable poverties. I recall returning to America after one eventful trip and dropping to my knees to kiss the runway tarmac. I always treasured my experiences but never took for granted each deplaning on U.S. soil. As much as I loved traveling abroad and throughout these united states, I am blessed to return to what many consider a slice of heaven on earth—Niceville!

Many residents and visitors have said that Niceville is one of the NICEst places on earth to live or visit, but there is more to this story. I want to offer my account of a local hero who saved a young child’s life one week and ingeniously engaged his department in community outreach the next. I am talking about the Battle of Lincoln Park, but let me not get ahead of myself.

On May 26, 2021, a 911 operator received a frantic cry for help concerning an unresponsive infant. Chief Dave Popwell arrived first on the scene, immediately beginning CPR. His efforts to resuscitate the infant, followed by the EMS personnel, provided the necessary life-sustaining measures. The child is alive today because of the lifesaving skills commenced by Chief Dave Popwell.

Fast forward two weeks later: someone reported a few pre-teen neighborhood children for selling lemonade without a license on the church property. Officer Bronson, instead of issuing some citations, handed them a crisp $100 bill. Social media quickly spread this act of generosity. The next day, the group doubled in number. The young entrepreneurs decided to split the proceeds with the police department. They raised over $500, but the Chief graciously declined. Instead, the police offered to accompany the young people to a venue of their choice. The youth decided against a movie or putt-putt and challenged the police department to a water balloon battle.

The day arrived when the Chief and ten of Niceville’s finest showed up at Lincoln Park to face the “lemonade kids” at high noon. The brave young warriors were well prepared. They had strategically stashed water balloons throughout the park. The police force was quickly outnumbered as other park visitors joined forces with the lemonade kids.

It seemed like children were coming from all sides: from the swings and the slides, even springing into action from the monkey bars. The Chief claimed that he witnessed junior Navy SEALS appear from the water. The battle raged until only a few officers remained, but they were short of ammunition (water). The youth refused to recognize the Chief’s white flag of surrender. Even the sweet little Unicorn girl pummeled the Chief forcing him to retreat for cover. This Battle of Lincoln Park will be remembered as Niceville’s Alamo. Moral of the story: not one Nicevillian should join the chorus to defund the police, but instead, look for ways to express our appreciation and “Back the Blue.”

Link to the video and article

Read the article in newspaper (page 24) 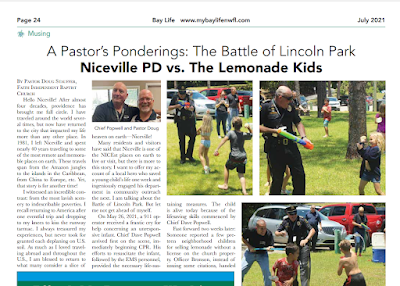 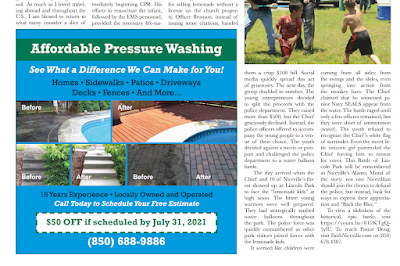 Posted by dougstauffer.com at 4:54 PM